Well, it did turn on when I started there, but only a few months later, and for the following year and change, it didn’t turn on. No video, no sound, not even the power LED. Being the console tinkerer I was I decided to bring in a gamebit screwdriver and open up the thing to see if I could figure out why it wouldn’t turn on. A few screws later I opened the console and…oh. Maybe that was why it wouldn’t turn on anymore. 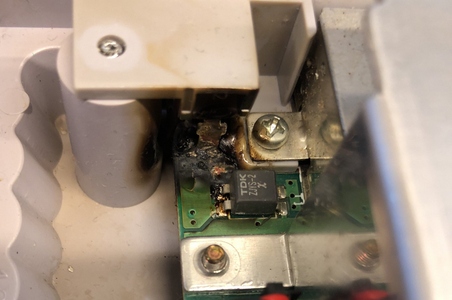 Over a year later, I brought the SNES home with me for further tinkering and got to planning. The power circuit on the SNES consists of a choke (labeled T1, it’s the TDK IC with four legs) to even out the approximately 10 V output by the brick, , a 1.5 A fuse, a power switch, a voltage regulator (screwed into the metal chassis next to it the legs of the TO-220 package are labeled I, G, and O for input, ground, and output) for down-converting the smoothed out 10 V into a clean 5 V, and some capacitors. All of this is connected to the power brick through a non-standard barrel connector. Or at least in theory. Here, the barrel connector had melted, the capacitors were invisible under the charred solder mask, and…actually, everything else seemed to still work. The power regulator was still functional, the switch was fine, even the fuse was A-OK. I wasn’t able to determine if the capacitors had blown or the choke was broken, but it was clear something had shorted.

So I did what any good electrical engineer wouldn’t do and accidentally wrenched off the entire barrel connector that had melted into a piece of the casing, tearing off a small piece of a few layers of the board, exposing the copper directly and even a layer beneath in some places. Whoops. That was more than I wanted to remove. This was probably still salvageable but would require some ingenuity to get it working well.

So I got to thinking. Originally I was going to install a modern 9 V barrel connector that I could use with a generic 9 V/1 A power adapter. These are pretty common. But it’s 2019 by the time I finally got around to working on this and basically everything runs off of USB micro-B now. And the SNES does run at the same voltage as that, now doesn’t it?

Instead of replacing just part of the power circuit I decided to replace basically all of it. After a few mishaps I came to a version of this that worked: removed choke, removed voltage regulator, USB Vcc connected to the input leg of the fuse, USB ground connected to the ground leg of the choke, and voltage regulator I and O pads connected. This configuration allows the power switch to retain functionality, though removing the regulator is required (and difficult).

The first step was to get a USB micro-B extension cable. These are relatively easy to find online and cost a few dollars. Cutting the cable open revealed four wires inside of the shield (loose wires and foil): red, white, green and, black. We only care about the red and black wires, so you can ignore the green and white ones (they’re the data pins). Make sure they don’t wind up connected to anything else after you cut them short though, so putting a bit of electrical tape on the end is a good idea. The red wire is the USB Vcc—the voltage in. This is +5 V and what we’ll be using to power the SNES. The black wire is the ground. This will complete the circuit so we’ll need to connect it to the ground plane of the SNES.

From here, I connected the black ground wire to ground pad from where I’d removed the choke. It’s the inner-front pad, but to be sure, I checked this using a multimeter and touching the leads to the pad and the G pad for the voltage regulator. The multimeter buzzed, indicating there was a low resistance connection between them. This pad is also somewhat hard to reach since it’s in a tight corner, so you may want to use a different ground. It doesn’t matter too much which one you use.

Next, I connected the red Vcc wire to the input pad of the fuse. That’s the back pad, close to one of the places where the metal chassis screws in. Be very careful to make sure that the exposed copper inside the red wire does not rest on this metal chassis, since that will lead to a short circuit and fry your USB cable and charger.

Finally, I bridged the input and output pads of the now-removed voltage regulator using a small piece of wire I cut out. Be careful when soldering this in, since it’s a small confined space. I was being not-very careful and burnt my thumb in the process.

Once that’s all connected, plug the SNES into a TV, a insert a game cartridge and controller, and plug in a USB cable. Flip on the power and you may or may not see anything on the TV. I had to test the connections a lot since the version I wound up with was flaky and amateurish at first. But eventually I got it working stably and closed up the system.

You may be wondering why I removed the choke, since most USB power supplies are switching, and thus may not provide the cleanest voltage—exactly the thing chokes are meant to clean up. Well, it was an accident. It was close enough to the burnt out portion of the power circuit that it got partially wrenched off when I removed the barrel connector, so removing it was the easiest way forward. I’m not sure if this has caused any problems for the SNES so far, but as a result I would recommend not using a cheap USB power supply to power the SNES. Apple’s, though more expensive, tend to be over-engineered and thus may provide cleaner voltage. I don’t know for a fact if this is true, or if noisy voltage can cause a problem, but my Super Game Boy does not boot consistently and I suspect there’s a possibility this is related.

Finally, this has not been extensively tested and was a modification done by someone whose catch phrase in college was “I am not an electrical engineer” so I’d recommend only doing this modification if your SNES power circuit is already broken, or if you’re an electrical engineer who knows better what they’re doing than I do. That said, there is something neat and novel about running early-1990s technology off of significantly more modern, and thus more convenient, means of powering electronics, although it’s also slightly comical to be powering something as physically large as a SNES off of something as tiny as USB micro-B.

Hopefully at some point an actual electrical engineer can pick up this work and write a better guide for converting TTL 5 volt game consoles, including the NES, to USB power. And maybe also providing a service to do it for you, since not everyone has a soldering iron handy.

And no, I’m not going to do a USB C version.